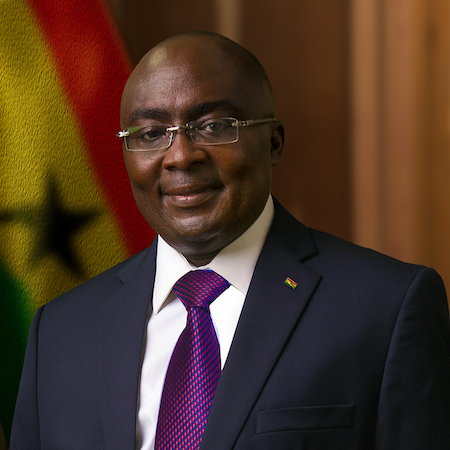 Dr Mahamudu Bawumia, became Vice President of the Republic of Ghana in 2017 upon the election of H. E. Nana Addo Dankwa Akufo-Addo as President.

His areas of specialization include Macroeconomics, International Economics, Development Economics and Monetary Policy.

From 1988 to 1990, Dr. Bawumia worked as a lecturer in Monetary Economics, and International Finance at the Emile Woolf College of Accountancy in London, England. He also served as an intern at the Research Department of the International Monetary Fund in Washington, DC, USA.

Between 1996 and 2000, Dr. Bawumia served as an Assistant Professor of Economics at Hankamer School of Business, Baylor University, Texas, USA, where he also received the Young Researcher Award in 1998. As a result of Dr. Bawumia’s commitment to excellence in teaching, he made the list of “Who is Who Among America’s Teachers” in 1999.

Dr. Mahamudu Bawumia was named Running Mate to the New Patriotic Party flagbearer, Nana Addo Dankwa Akufo-Addo in the 2008 Elections, when he was barely 45.

After the 2008 Elections, which the NPP and its Presidential ticket lost by the narrowest of margins, Dr. Bawumia was engaged on several assignments internationally.

He served as a Consultant to the UN Economic Commission of Africa between February and March 2009 during which he prepared a Paper on Africa’s position for the G20 London Summit.

Between April and October 2009, Dr. Bawumia served as a Visiting Scholar at the University of British Columbia Liu Centre for Global Studies and Fisheries Centre.

In October 2009, he was appointed as a Fellow of the International Growth Centre (IGC), a research institute based jointly at the London School of Economics and Political Science and Oxford University that provides advice on economic growth to governments of developing countries, specifically serving as an IGC Team Member for Sierra Leone.

He also served as an Advisor to the Central Bank of Sierra Leone on the redesigning of the organizational structure of the Bank and its monetary policy framework.

Between October 2009 and October 2010, he also served as a Senior Research Associate at the Centre for the Study of African Economies, University of Oxford, Department of Economics.

Until recently, he served as a Visiting Professor of Economic Governance at the Central University in Ghana.

NPP Flagbearer Nana Addo Dankwa Akufo-Addo again tapped the economist and banker as his running mate for the 2016 elections, having also chosen him for the 2012 elections, and the two worked together with the party to record the unprecedented feat of defeating an incumbent who had served just one term as President.

On January 7, 2017, Dr Bawumia was sworn in as Ghana’s 7th Vice President under the 4th Republic.

He has numerous publications to his credit, including “Monetary Policy and Financial Sector Reform in Africa, Ghana’s Experience” which has been described as one of the most comprehensive and scholarly jobs ever done on the country’s monetary policy and economy generally.

He is married to Her Excellency Hajia Samira Ramadan Bawumia and they have four children.

Vice President Bawumia loves football, being an ardent supporter of Tottenham Hotspurs in the English Premiership and RTU in Ghana and is a keen sports enthusiast who follows a variety of sports passionately including Tennis and athletics.